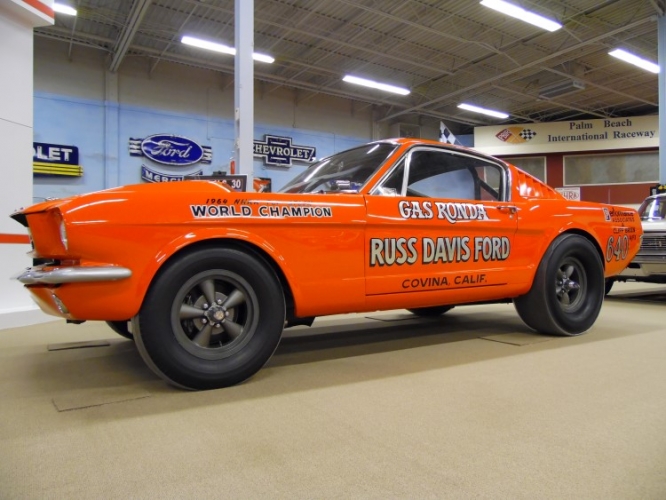 Late in 1964, ten Mustang fastbacks, serial numbers 5F09_380230 though 5F09_380240 were shipped (without engines) by Ford to Holman Moody to be prepared for a new A/FX class that was taking the country by storm. Eight of these cars were delivered to members of Ford's "Drag Council" - Gas Ronda, Dick Brannan, Bill Lawton, Phil Bonner, Al Joniec, Les Ritchey, Clester Andrews, and Len Richter. One car was retained by Ford as a show car while H-M held another as a "spare".

Five of the cars, including Ronda's were fitted with Ford's rare new 427 SOHC engine. The remaining three were given the 427 wedge Hi Riser engine until more "cammers" could be built. A letter from Ford accompanying each vehicle stated "... to be used only in drag strip events, sold to the individual for the sum of one dollar". These cars cost Ford $11,170 in modifications alone according to the price quote from Holman-Moody. Quite an investment in 1965 dollars!

After destroying his first Mustang when an axle broke while testing in January, Ronda received this car, the "show car" that he debuted at the '65 NHRA Winternationals. The A/FX Mustangs made such a splash that Super Stock magazine proclaimed - "Mustangs run wild at Pomona".

Ronda's first big win in this car came right after the Winternationals at the AHRA World Finals, where he set a new class record at 10.43 and 134.73 mph. The easily recognizable Poppy Red racer was a huge fan favorite and enjoyed national acclaim throughout its career. To this day, Gas Ronda's '65 Mustang remains one of the most fondly recalled sixties Ford Drag racers.

From his book "Factory Lightweights"