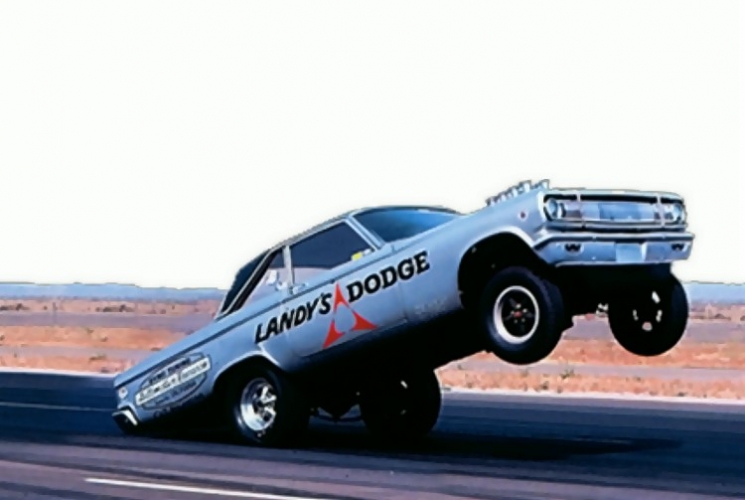 The famous wheelstand photo says it all. Arguably the most famous, most photographed drag car of all time, this is Dick Landy's 1965 Altered Wheelbase Hemi Dodge. Along with ten other factory altered's, Landy instantly turned stock bodied drag racing upside down.

In an all out effort to dominate Top Stock/Factory Experimental drag racing, Chrysler had secretly developed plans for an "AFX Dragster". The concept was to utilize their awesome Hemi power by redistributing weight to the rear wheels.The bodies were acid dipped to reduce weight. Sheet metal was replaced with fiberglass. Thin Plexiglass replaced all the windows. The interior was comprised of only a fiberglass dash, one lightweight bucket seat from an A100 van, and a thin layer of carpeting. Most importantly, the rear wheels were moved forward 15 inches while the fronts were moved 10 inches.

The result was six Dodges and five Plymouths that changed drag racing forever. For obvious reasons, they were dubbed "funny cars" by the first automotive writer who saw them.

Ultimately, Landy won 39 out of 40 match races with this car and accumulated five major event titles. Running nitro-mentane fuel with Hillborn injectors, the big Dodge ran a best of 165 mph.

Ironically, the acid dipped bodies made these cars quite fragile and when combined with the continual abusive wheelstands, their racing careers where short lived. Only five of the factory altereds have survived and most have undergone significant reconstruction to achieve a semblance of the original. Landy's car, amazingly, has remained intact and survived well, probably due to all the structural reinforcement that Dick had integrated into the chassis. Credit must also be given to the subsequent knowledgeable and respectful owners who helped preserve this car for posterity, primary among them being Mopar historian and collector Mike Guffey.

In 2010, restoration expert "Hemi Eddie" Strzelecki went through the car completely. Every effort went into maintaining total originality and authenticity, while bringing the cosmetics up to the high standards befitting a car of this stature.

Upon seeing the results, Mopar expert Galen Govier said "this is the best example in existence...."