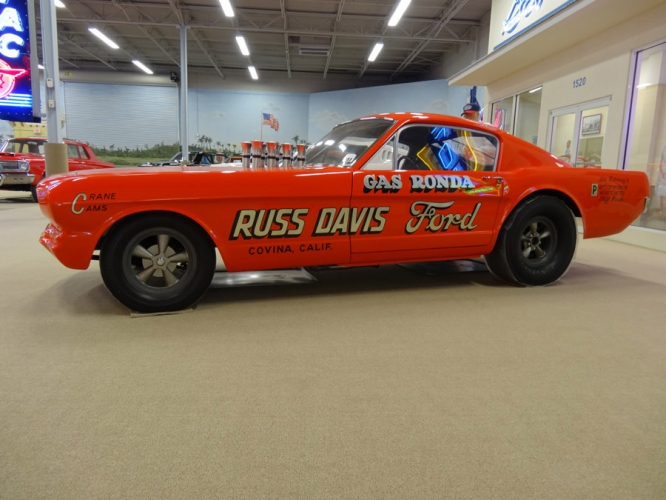 This is the car that transitioned the production bodied A/FXers into the full blown tube chassis cars of the late 60's. One of only 6 stretched Mustangs built by Holman-Moody for Ford Motor Company, it mounted an extended Mustang body onto a specially built tube chassis. The result was a 12" longer wheelbase which stabilized the car at the expected 160 mph plus speeds while retaining much of the traditional Mustang appearance.

No doubt it was a race car! The SOHC "cammer" engine with those tall Hillborn injector stacks extending above the hood that seemed yards long belied any notion of civility. Performance was astonishing - Ronda's longnose was the first full-bodied car to break into the eight second bracket and ultimately reached an all-time record top mph of 174.08.

1966 was another record year for Ronda as he sat at or near the top of the Drag News Top Ten. He compiled wins at the AHRA World Championships and at the giant "Smokers" meet at Bakersfield. Gas won C/Fuel at the NHRA Winternationals and was almost unbeatable in match races, besting Sox and Martin in Drag Racing Magazine's East vs. West Meet among other wins.